The School of Journalism and Communication of Nanjing University held three online class meetings on February 23 to 24 for students on the theme of “Fighting the epidemic in one mind and passing the spirit from generation to generation” to strengthen their confidence, determination and responsibility.

The students were taught to regard the epidemic rationally, treat it correctly, and deeply understand the patriotism of our time, the unyielding national spirit and the advantage of the system of pooling all resources to complete major missions.

In the online conference room, the students present connected with a number of classmates whose homes are in Hubei. These classmates shared what they had seen and heard recently, and then the teachers and students expressed their greetings and concerns for them. All of them looked forward to their return to campus as soon as possible.

“Going where the epidemic is, and fighting it till it perishes.” The students of the School of Journalism and Communication also made their contributions to the fight against the epidemic based on the strengths of their specialties.

Huang Sida, Wang Han, Liu Zhixin, Long Pan and many other students participated in the series of “observation of NJU students’ fight against COVID-19” and shared their feelings of writing reports via online voice. At present, the observation team has published nearly 50 reports.

In addition, since January 24, NJU students, many of whom come from School of Journalism and Communication, have formed the Hubei Assistance Group and organized several fund-raising activities for the purchase of medical supplies. The accumulative fund reached hundreds of thousands of yuan.

The students learned about the meritorious deeds of Cheng Yuanzhou, a 2006 alumnus of the School of Journalism and Communication and a journalist of the Hubei Branch of the People’s Daily who was on the frontline of the fight against the epidemic. As one of the earliest journalists who paid attention to and reported on the epidemic in Wuhan, Cheng has been on the frontline for more than 50 days, and his initial mission and responsibility to be on the frontline have reinforced the confidence of the younger students.

In the battle against the epidemic, China has won worldwide praise for its vigorous prevention and control of the epidemic, as well as its open and transparent information exchange and cooperation with the international community. 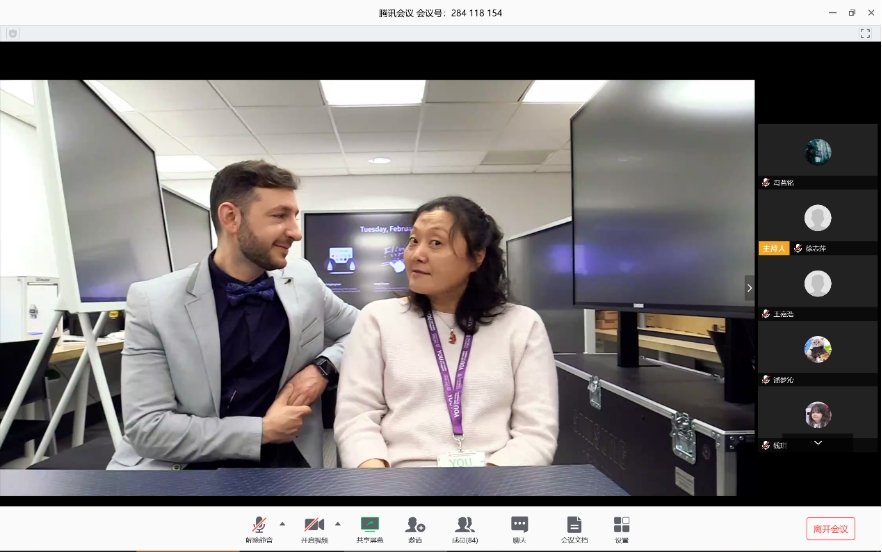 Damyan and Grace Wang, two teachers from the University of Stirling who are responsible for the overseas study tour of our experimental media class, sent a video to express their support and encouragement to our students and teachers and their wishes for the success of China’s fight against the epidemic. At the end of the video, the two teachers said together in Chinese, “Go, China! Go, Nanjing University! Go, teachers! Go, kids!”

The students felt very touched by their words.

After carefully studying a series of important instructions by General Secretary Xi Jinping on the fight against the epidemic, the host led the students to an in-depth study. In particular, they learned the policies in four aspects: the situation and the key work of epidemic prevention and control, publicity, education and public opinion guidance, maintaining social stability, and keeping economy running smoothly. General Secretary Xi’s words